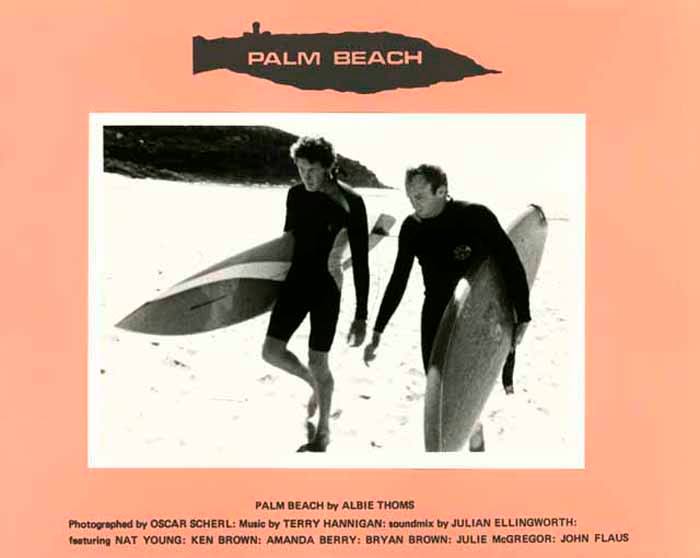 ‘Palm Beach’ is a reflection of the suburban sub-culture of Sydney’s Northern Beaches area. A tale of surf, drugs and rock ‘n’ roll, it reveals 48 hours in the lives of a handful of young Australians. These characters are all unconsciously bound together by the Sydney radio station they all listen to as it blasts out its continuous stream of on-the-spot news, hard-sell commercials and high-energy rock. Eventually, they all find themselves together at the same Palm Beach party. The different things that happen to them there have dire consequences. Their problems are resolved in ways none of them could have imagined.

Directed and produced by Albie Thoms (1941-2012), avant-gardist and strong advocate for an independent Australian cinema

PALM BEACH shared First Prize for “Best Australian Film” at the 20th Adelaide International Film Festival, and was nominated in the “Best Original Screenplay” category in the Australian Film Awards.

“Palm Beach is perhaps one of the outstanding Australian films of recent years. It is masterful film-making breaking a lot of the conventional rules with great effectiveness” – CANBERRA TIMES

WIFF is produced by the Funknuckle Collective, a small team of locals who present cultural events in the Jervis Bay region.

DONATIONS
Proceeds from the event will be directed to the Shoalhaven Mayoral Relief Fund – for Bush Fire Relief.