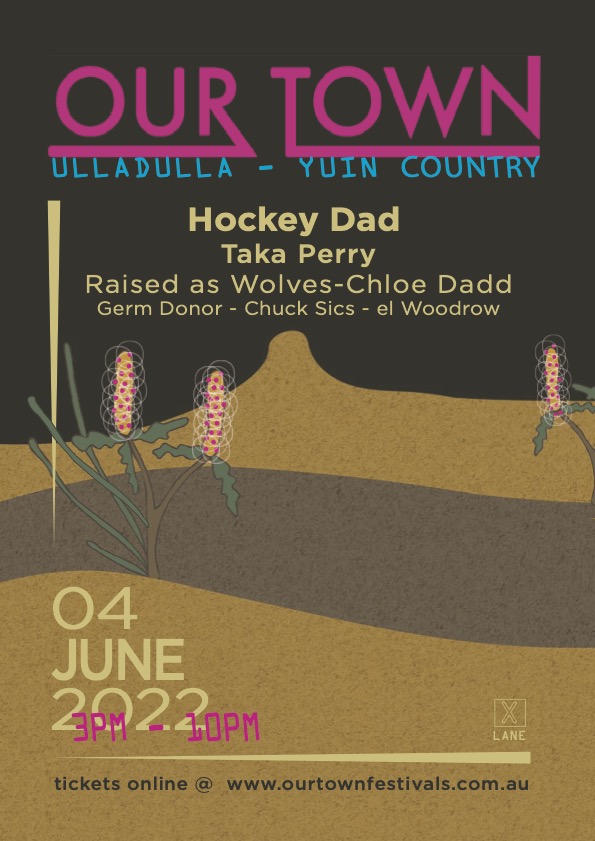 ‘Our Town, in Ulladulla, June 4, sees Hockey Dad leading a crew of international touring acts that includes wunderkind music producer and multi instrumentalist Taka Perry, and some of the nation’s hottest emerging artists: the likes of Raised As Wolves with their powerhouse punk, and the multidimensional Chloe Dadd.

Featuring seven acts over seven hours, Our Town is a one-day music marathon, with a line-up worthy of bigger-name, more costly events that seem to sail past but never dock locally.

Our Town is the brainchild of a team of Ulladulla locals who press-ganged themselves into launching a festival right in the heart of the harbour town.

Food trucks and Bar.
No BYO food and drinks.
All ages gig at the Dunn Lewis Centre – Enter via Strike Lane (at rear)
“Festivals for our future focused on waste free and sustainable events.”’

Across five years, two studio albums and an EP, Windang’s Hockey Dad achieved more than two coastal kids could ever collectively dream of. Their last effort, 2018’s Blend Inn, ended up being one of the year’s biggest successes for independent Australian music. Not only did it crack the top 10 of the ARIA album charts, but it also notched up four spots in triple j’s Hottest 100, two sold-out national tours and accrued nearly 24 million streams on Spotify alone. Not bad for a pair of kids from a town where its previous biggest musical export was a jingle for a computer store.

Taka Perry is an all in one musical powerhouse: music producer, songwriter and multi-instrumentalist. His performance last year of Jesus Walks on Triple J’s Like a Version, proved one of the year’s most popular and was dubbed by Rolling Stone ‘an anthem for the current times’.

Taka’s creative contributions have amassed over 150 million plays on Spotify, with a string of acclaimed singles and past credits including Money Problems by Max Frost, Nicotine by Sycco and the ARIA multi-platinum certified Younger by Ruel.

Raised As Wolves, the 3-piece punk band out of Wollongong/Sydney, were brought up on the melodic edge and energy of 90s pop punk. Get ready for loud guitars, raucous drums and catchy choruses.

Chloe Dadd struts her alternative indie roots with her danceable dream-pop, combining hooky guitar with a powerful voice, sitting on an ocean of solid beats. A multi-instrumentalist and producer, hailing from the South Coast, Chloe is bringing her powerhouse trio to town to deliver her empowered live show.