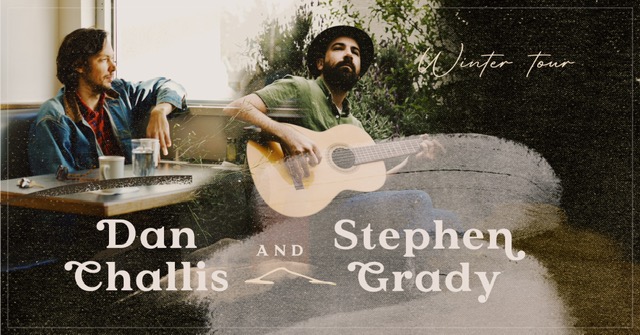 Two Australian singer-songwriters have recently released their new albums and are hitting the road this winter to connect with audiences across the country.

Folk singers at heart, their individual stories and songs are expressed in the simplest way possible, through guitar and voice.

Grady was part of the Australian folk duo, The Ahern Brothers, and toured extensively; most notably he supported the ‘Tex, Don and Charlie’ tour back in 2017.

Dan Challis’s album ‘No Lonely Road’, came out in November 2020 and was inspired by a 4-year journey across North America. It has been called “rich, authentic acoustic folk… And should make you feel something raw and timeless” (EarToTheGround Music blog).

Challis is now a Sydney-based artist and has garnered a healthy following after playing house concerts last year, in support of his album release (www.instagram.com/p/CIehCADAkgQ/).

Please join us for a night of acoustic folk music, by two songwriters who care deeply about their craft.

Dan Challis Bio
Once in a while, a voice emerges painting vivid pictures of emotions, places, and people; that resonates intuitively with listeners on a most humble level. With singer-songwriter Dan Challis’s sophomore album ‘No Lonely Road’, we ebb and flow on his journey of love, loss, and reflection through the footprints he laid while on a four-year journey away from his home in Sydney, Australia; through New York City and eventually settling on the rainy coast of Vancouver Island, Canada.

“The album represents a short but significant chapter of my journey as a songwriter. Being there changed me as a person and I wanted the songs to reflect that. I fell in love with a Canadian and had a grand vision of how my life would play out; ultimately it wasn’t to be. But I can look back and say I captured that moment in time, and the things that had a profound impact on my life. I wouldn’t have been able to write this album without those experiences.”

Dan’s tender and stripped-back sound was melded together with a fresh contemporary approach, thanks to Melbourne producer and singer-songwriter Stephen Grady (The Ahern Brothers) and recording engineer Roger Bergodaz (James Ellis Band, Raised by Eagles) at Union Street Studio in Melbourne. Both Grady and Bergodaz worked in combining the ‘old’ with the ‘new’ in generating a modern approach to a classic sound; think Americana inspired jangly guitars with ambient piano effects, which is the flavour on the outlaw country inspired tune ‘A tale of two men’.

Through his poignant insights we are able to see Dan mature and grow in each one of the album’s songs in stylistically understated tones and sensibilities. Songs like ‘Dust in the Wind’ and ‘No Lonely Road’ create a musically upbeat contrast that moves us through the same type of thoughtful reflections from different angles and perhaps even gives a nod to some contemporary artists.

From beginning to end this carefully crafted album is simply Dan’s story, but his experiences are ones most of us have or will go through during our lives. He has made himself admirably vulnerable for the sake of his craft, and his work deserves attention.

At the heart of it, Melbourne based Stephen Grady is a songwriter. His aim is precise; mastering the craft and getting in touch with the words and music on a personal level. And it is this in-depth, soul searching approach that shines through on his new album ‘Wonder’.

Recorded over one weekend in February 2020 at Union Street Studios in Brunswick, Melbourne with producer/engineer/musician Roger Bergodaz (Lost Ragas/Paul Kelly); ‘Wonder’ is an album with timeless sounds and influences. Grady & Bergodaz were very self-sufficient and performed all the instruments on the album.

The lead track single ‘Spring’, Grady wrote one day, after walking home from Essendon station late one afternoon. “Queensland will always be my home but I’m so inspired by my current home Melbourne and the change in seasons, I wanted to capture some of its beauty in a track like ‘Spring.’ (https://www.youtube.com/watch?v=we_QWeGEkEI)  Since the hiatus of the Australian folk duo The Ahern Brothers, which Grady was a part of, the songwriter went on a writing journey and wrote a total of 60 songs all the while attempting to rediscover an individual sound. “I started a band, and recorded an up-tempo pop style album in ‘Streets of Gold’, which I released last year.”

“Although I experimented with bigger and brighter sounds on that album, ultimately it taught me that I needed to get back to the basics of singing and playing my nylon-string guitar; really my first instrument that I began songwriting on, all those years ago. That’s where I feel I can truly connect with the song, and hopefully with the listener.   Grady’s music highlights the evolution of an accomplished songwriter with a career of ups and downs in the industry, much of which has given Grady plenty of grist for the mill when it comes to creating meaningful art.

“Fame isn’t what really interests me; its always been about the songs meaning something to someone.”

*The tickets online are free to secure yourself a spot, but donation upon arrival at the door will be greatly appreciated and will help us to keep musicians and bands regularly stopping through at the garden.*
Thanks all for your support and keeping live music alive in our area…

Food will be available from surrounding shops/restaurants…
BYO some rugs, chairs, whatever you need to stay comfortable:)