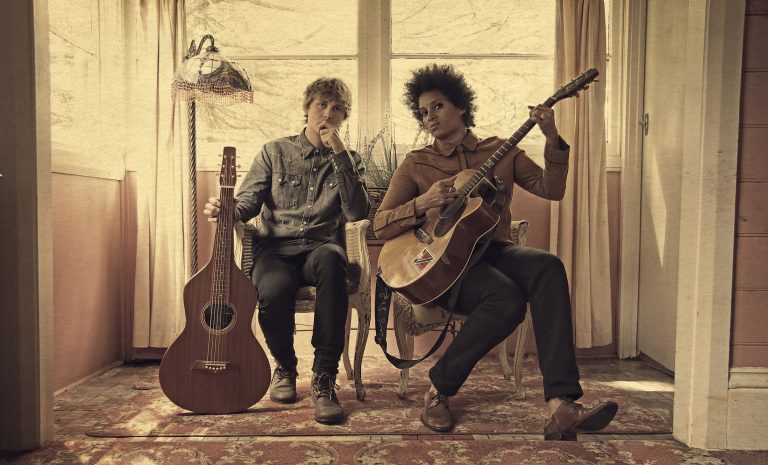 It’s not surprising that word of mouth is spreading like wild fire. The explosive duo, Z-STAR DELTA, are fast becoming hot music property, thanks to their legendary live performances. Featuring international artist and producer Zee Gachette on Vocals/Drums/Ac Gtr and guitar prodigy Sebastien Heintz on Electric/Lapsteel/Bass/Synth/Loops. It’s an impressively huge sounds for a two piece band, that travels through an intoxicating and modern mix of country blues and desert rock.

But so much more than that! While some bands open the doors, Z-STAR DELTA are what’s on the other side. The unlikely duo thrive on stage, weaving between one another; one moment seductive and poetic, the next wild and furious effortlessly delivering a fascinating cinematic road trip of sound.

Musically speaking, it’s no surprise that Zee’s captivating tone and grit have been compared to the likes of Nina Simone and Janis Joplin. But what’s even more striking is that these powerful vocals are being delivered whilst she drums with a compelling, Bo Diddly-inspired, tribal intensity. Then there’s Seb. His masterful musicality akin to the creative and emotional feel of Ben Harper, with the phat catchy blues rock riffs of Jack White. Together, Zee and Seb are an incomparable force to be reckoned with.

Z-STAR DELTA were born on the road down under off the back of an Australian tour for Z-STAR (the mothership). Zee and Seb played a series of duo shows in-between festival sets acoustically, and before they knew it a whole new blues offshoot project was created. New energy, new sound, new tunes. Since then, the duo returned to Australia every year since 2016 in their own right as Z-STAR DELTA, and have performed over 100 shows around the continent and in the UK, playing headline slots at Mitchell’s Creek Rock & Blues, Camelot Lounge, Mullum Music Festival, Blue Mountains Music Festival, The Basement and a smokin’ hot debut at Glastonbury last year.

The Australian media have been championing the duo with generous press coverage and airplay of the live ‘tour CD’ recordings, interviews and live performances on Triple J, ABC, 4ZZZ, PBS and a plethora of regional stations.