The time has finally arrived for the Red Wine Roses to unveil their debut full-length album, Ambition Nation. In celebration of this milestone and their well loved scripture the band would like to officially invite you all to the Ambition Nation Scout Hall Tour. Performing in Kurnell, Huskisson, Kiama and Stanwell Park.

Joining on the tour is the South Coast one man band Josh Rawiri, Australian singer songwriter recognised for his heartfelt and potent live genre-fusion of pop, folk, deep roots rock and soulful blues. 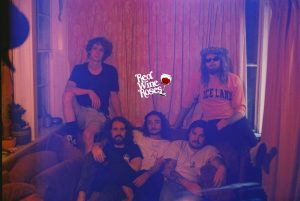 Red Wine Roses are an eclectic band that have been described as “five different cats with five different record stacks”. After some time of doing the rounds in the touring scene, supporting great acts such as The Angels, The Preatures, The Troggs, DZ Deathrays and Wild Honey, the boys have spent the last two years branching out and tweaking their sound. Swapping their blues roots for something a little funkier, they’ve been gradually coming up with Ambition Nation, their first full-length album.

Album is available Oct 25th on all streaming platforms.